These are two words I never would have expected to see in the same sentence. But Colorado’s strangest rampage and the current climate of Black Lives Matter protests and violent fascist reactions to them have brought these words into the same virtual realm.

I knew right from the day he destroyed my town high the mountains of Colorado that Marv Heemeyer would become a hero in the world of hate groups and anti-government extremists. The last two chapters of my book go into detail about this aspect of the Killdozer rampage.

But I never expected his influence and the mythic power of his Killdozer rampage would become a slogan and Internet meme inspiring murder and unrest a full 16 years later.

Recent reporting from a variety of news outlets, and my research as well, has drawn a direct connection between Marv Heemeyer’s writings to the Boogaloo boys and their attacks on law enforcement and protestors in the midst of the recent Black Lives Matter protests that recently took place across the nation.

This outsized influence of Heemeyer and his Killdozer (he built an 85-ton tank out of a Komatsu bulldozer, armed it and attacked Granby, destroying 13 buildings while shooting at police and attempting to blow up the town) became obvious in the recent ambush killing of a federal officer in Oakland, Calif. Steven Carillo, 32, was arrested and charged with 19 felonies including murder after a June 6 ambush of law enforcement officers in Santa Cruz. He has also been charged in the fatal shooting of a federal officer in Oakland.

Before he was arrested, Carrillo scrawled the words “boog” and the phrases “I became unreasonable” and “stop the duopoly” in blood on the hood of a car.

“I became unreasonable” has become a meme in Boogaloo social media across several platforms. It refers to a statement by Heemeyer, who has become a hero in for some extremist, anti-government groups. Heemeyer, whom these groups also refer to as “killdozer,” left behind scribblings and lengthy tapes justifying his actions. He wrote on a for sale sign left in the shed where he built the tank that “I would not have to be so unreasonable” if a long list of conditions had been met. The phrase was repeated by ditto marks numerous times in his scribblings on the sign. 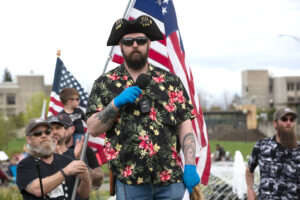 Perhaps not coincidentally, the so-called “boogaloo” boys where Hawaiian shirts as a sort of unofficial uniform or identifier. Heemeyer wore a Hawaiian-style print shirt when he conducted his rampage in Granby.

“Boog” is a phrase associated with the Boogaloo, a libertarian anti-government movement that claims to be preparing for a civil war in the United States. It’s only a movement (not an official organization with a formal chain of command) organized mainly around social media posts and groups.

“Stop the duopoly” refers to the two-party, Republican and Democratic dominance in the U.S. political system. It’s a slogan frequently used by third-party and libertarian candidates.

Facebook, the most popular social media platform, hosted many of the virtual boogaloo groups, where the members carried on with their anti-government and fascist rhetoric. But it was so bad that even Facebook has official removed the boogaloo-oriented posts and pages because of their violent and anti-government nature.

Heemeyer and his actions in Granby have elevated him to the level of anti-government hero based on false narratives and fake facts circulated on-line about his motivation for carrying out the rampage on June 4, 2004.

Heemeyer, who bought property in Granby in 1992, moved to Grand Lake the same year. In his efforts to operate a muffler shop he put on the Granby property, and to sell the property at inflated prices to his neighbors, he became cross-wise with the Town of Granby, his neighbors and the local newspaper. He attempted to stop construction of a concrete plant near his muffler shop through the town’s zoning appeals process, but failed.

He sued the town and his neighbors, but lost the lawsuit. He then became embittered and attacked the town with his bulldozer-tank that he had built in secret. He didn’t kill anyone in the rampage, but he tried. He fired weapons he had mounted in the tank at police and he tried to blow up the town by shooting at massive propane tanks in the town.

His machine over-heated and he became stuck in a building he was destroying. He killed himself in the tank with a single gunshot to his head.

Heemeyer left behind two and a half hours of tapes and scribblings, all which posited his own conspiracy theories about how he was mistreated by town government, the newspaper and his neighbors. Yet much of what he said was untrue or highly slanted to bolster his animus toward the town and his neighbors. He was the epitome of the unreliable narrator.

People who have researched the case, including me (I was a victim of the rampage and he destroyed our newspaper building), have come to seen him as a “martyr without a cause.” Heemeyer wasn’t treated poorly. He just didn’t win.

And yet he’s been embraced in the on-line word as a man pushed too far by unfair government and backstabbing society.

So once again Heemeyer and his Killdozer are out there in the virtual world of on-line extremists, inspiring actions that at the minimum cause mayhem, and as is probable in this case, murder.

TREAD, the KILLDOZER film, opens with Q and A's this week
No more posts