Yes, there are drinks associated with the Killdozer.

And not all of them are alcoholic.

So let me convey the details about the Killdozer drinks that may shed light on the bulldozer rampage carried out by Marvin Heemeyer in Granby, Colorado on June 4, 2004.

Yes, you read that right. The first Killdozer drink is Slimfast, a diet drink that is used to replace some meals to enhance weight loss. This drink is included in the Killdozer drink pantheon because it seems that Marv Heemeyer used Slimfast and even had some in the dozer when he carried out his attack on Granby. 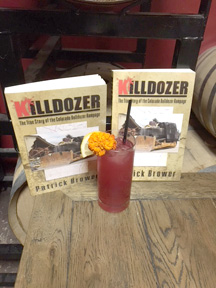 This special edition Killdozer Kocktail was created by Jeff at Idlewild Distillery in Winter Park for a book event on the Killdozer book conducted at the distillery.

Why Slimfast? Well, nobody knows for sure. I speculate that Marv drank Slimfast because it was an easy way to get some nourishment while he was involved in the difficult and time-consuming work of building the Killdozer, which he did over a period of six months before the rampage. It would have given him quick energy and tamped down any hunger pangs he might have felt while working on his machine of revenge.

And no, I don’t think he drank Slimfast to control his weight. Heemeyer was a fit man and had very little fat to worry about. My theory is he had it for quick, easy-to-access energy, not to lose weight.

For a book event I conducted at Idlewild Spirits in Winter Park in mid-July we conducted a promotion. In it any person who purchased a copy of my book, “KILLDOZER: The True Story of the Colorado Bulldozer Rampage,” would get a free Killdozer Kocktail. This drink, dreamt up by Jeff Ruhl, the owner of Idlewild Spirits, was popular with attendees. Fourteen of the 30 people who attended the event got a free drink. 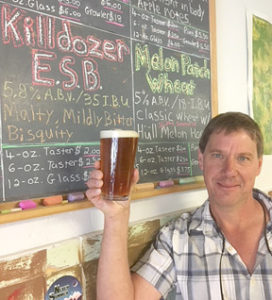 Brewmaster Kirk Main of Never Summer Brewing Company in Granby shows off his Killdozer ESB, a great-tasting beer that he developed for a book release party at his tasting room brewery in Granby, Colorado.

Here’s the recipe for the Killdozer Kocktail:

Mix in a tall glass with ice and and aesthetic embellishment (such as a carnation) and, voila, you have a Killdozer Kocktail.

There’s another Killdozer drink out there. It’s called the Killdozer Extra Special Bitter (ESB), concocted by Kirk Main at Granby’s only brewery and tasting room, Never Summer Brewing Company. It’s an excellent and smooth amber-colored beer that doesn’t have any “bitter” flavor at all.

The name suggests, perhaps, a connection to the bitterness that many felt after businesses were destroyed and lives disrupted after the bulldozer rampage.

With Kirk’s Killdozer Extra Special Bitter we also conducted a promotional event in which anyone who bought the book got a free beer. That was my first book release party and I must say that it was a success. We sold 75 books and many more beers. The beer give-away helped, I’m sure!

Those are Killdozer drinks that I know of for now. But don’t be surprised if more come in future as I continue to conduct book events around the region.

Who knows, maybe somebody will come up with a Killdozer Kahlua Kooler.